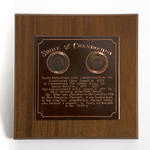 Production date
Description
Timber plaque with attached copper plate inscription and two medallions. Both medallions have holes in the middle of the top where a ring would have been to help with display.

The copper medallion on the left was produced to commemorate the Diamond Jubilee of Queen Victoria in 1897. The inscription on the upright side reads "Queen Victoria's 60th Year of Reign / 1837 to 1897" with two profile images of Queen Victoria. One depicting her at the start of her reign and the other of her in 1897. The verso is obscured by the copper plate and it cannot be determined that it does depict the Cranbourne Shire offices. The difference in materials between the two medallions cast doubts on the attribution.

The other gilt bronze medallion shows a picture of the old Cranbourne Shire offices and what was then the Town Hall. It is surrounded by the inscription "Shire of Cranbourne / A.N. Facey, Secretary" in the roundel and "D. Craig, President" above the image and "1897" below. Medallions such as these were produced by many of the councils in the Australian colonies. Many extant examples still exist for these municipalities with the same design features of the respective town hall surrounded by the roundel inscription. The Cranbourne Town Hall by comparison is less extravagant, indicative of the age of the municipality and its influence at the time. The Cranbourne medallion is unique due to its mention of both the president and secretary on the design. The verso would depict the identical image of the young bust and shrouded veil profile portraits of Queen Victoria as shown on the other medallion.

The copper plate has been beautifully inscribed to display these medallions. It reads, "These Medallions were commissioned by the / Cranbourne Shire Council in 1897 / to commemorate the Jubilee Reign of / Queen Victoria, 1837 - 1897 / One was presented to the council in 1972 by / Mr. J Vorberg of San Remo, Victoria / the other was presented to the council in 1981 / by Mrs. Marjorie Marriott, it was handed down / to her from her grandfather, Herbert Colling / who, farmed a property in Peers Rd. Tooradin / in the 1890's" and is mounted on bevelled and stained timber board.