Production date
Description
Ceremonial trowel made of electroplated nickelsilver (EPNS) with a turned blackwood handle, right angle mount and electroplated tine. The trowel is decorated around the edge with a scrollwork pattern and is inscribed. Manufactured by T. County of T.J & H.M County Trophies on Elizabeth Street, Melbourne as indicated by maker's mark on verso. The EPNS is showing signs of tarnish.

In 1978 a new City of Berwick municipal office, the Civic Centre, was built in Narre Warren on land donated by the Overland Corporation, the developer of the Fountain Gate Shopping Centre. The building was designed and constructed by Jennings Industries. The foundation stone was laid on February 17, 1978 by Councillor Hugh Hodson, and the Civic Centre was officially opened on December 8, 1978 by the Governor of Victoria, Sir Henry Winneke. 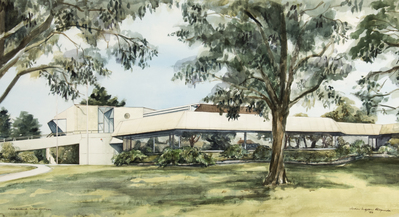