The Riding of the Bounds was an annual event that took place in the City of Casey between 1994 and 2015. It linked back to a centuries-old tradition in sister city Berwick-upon-Tweed, Northumbria, England. Riders followed a route through local streets and participate in ceremonies along Casey's border with the Shire of Cardinia. The Mayor would wave off riders from the local showgrounds with instructions to inspect the boundary with the neighbouring municipality. Once the ride was complete, the Marshall would report back to the Mayor that the boundaries were secure, and this would herald the commencement of the presentation ceremony. This re-enactment of the Berwick-Upon-Tweed Riding of the Bounds was filled with pomp and ceremony and many of the riders took the opportunity to dress in period costume in recognition of the history of this event.

While the ride still takes place annually in Berwick-upon-Tweed, the City of Casey event was discontinued after 2015 due to dwindling numbers.

Associated event
Riding of the Bounds 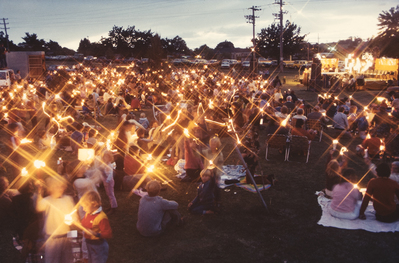